The day I played at Wembley Stadium

This has nothing to do with useful technology, but I’m so thrilled I just have to share this story.

Yesterday I had the massive honour to play football at Wembley Stadium. Just 24 hours after England crashed out of the Euro 2008 qualifications after losing 2-3 to Croatia at Wembley, I found myself in the home team changing room preparing to take to the pitch. I won my place in the team in a competition run for Microsoft staff. At first, I was reluctant to enter the competition, thinking that my football days were behind me. Today, I’m so glad I eventually did. 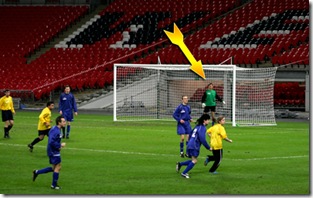 The inaugural Microsoft Charity Cup competition was organised as part of Microsoft’s status as a Founding Partner of Wembley Stadium. For a few brief hours we were invited to use the stadium as our own. So we decided to host a mini football tournament and make life long dreams come true for lots of people.

Five teams took part: Microsoft, Partners, Agencies, the Wooden Spoon charity, and House of Commons. Each team played twice; just 15 minutes for each game. And the best two teams played for a third time in the final. I was playing in goal for Microsoft, or ‘Carla’s Hotmails’ as we were named in honour of Carla, our only female player. We didn’t win. We didn’t even score. We conceded one goal, or rather, I suppose, I let one goal in. Being on that enormous pitch under the floodlights was 99% terrifying, 1% a bit scary. But none of that matters. We played on the hallowed turf and this British schoolboy’s dream was fulfilled.

We also raised over £50,000 for the Wooden Spoon charity. The money will pay for a new wing at one of their centres so parents can stay overnight with their children. A very deserving cause.

The moral of the story? When presented with an opportunity, seize it. Stretch yourself beyond your comfort zone and take advantage of everything that comes your way. Life’s too short to fill with regrets.

Written by Allister Frost
Posted in: Uncategorized
Telecommuting is good for you
Benefits Blunder - what should you do?