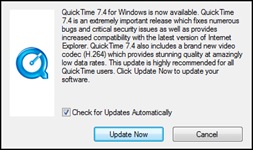 Why are Apple Software Updates for QuickTime and iTunes so annoying? They seem to pop up on a frighteningly regular basis (every 6 weeks on average during 2007); can these applications really be so bug-infested or in need of enhancement that they have to be patched so frequently?

Actually, it’s not the patching that bothers me. It’s the invasiveness of the update process which automatically attempts to ‘enhance’ my life with iTunes, even though I have a long history of declining this application in the past. iTunes needs QuickTime in order to function correctly, not the other way round. On top of this, Apple makes me "opt-out" of three communication preferences, every time they patch their software. Much of the EU marketing industry started moving to an "opt-in" process six years ago whereby the user has to make a conscious choice to volunteer (opt-in) to receive marketing communications. Not Apple though. They still prefer to hoist marketing messages upon us, then expect us to deselect or unsubscribe when (or, more likely, if) we realise we don’t want them. Anyone who uses QuickTime will be familiar with this screen and know they have to click in five places before their iTunes and newsletter free installation can begin: 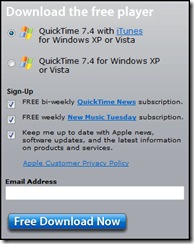 And while I’m on the subject, I don’t understand why every time Apple releases a bug fix, the customisation choices I’ve made in the past are erased so that QuickTime Player can once again attempt to seize control of all my media files. Like many people I only use QuickTime to view the occasional video clip online; I don’t want or need QuickTime for anything else. So why after updating QuickTime is the ‘Do not ask to perform this check again’ box now unticked again?:

This is just plain rude. Brute force attempts to dominate my digital life are so out of touch with the empowered way people now use their computers. Sure, I can tick the box yet again to ask Apple not to perform this check, but why make me do this again, and again, and again?

And, no Apple, I don’t want to ‘Go Pro’ every time I patch QuickTime. Stop trying to sell me stuff I don’t need. If you keep behaving like a desperate double-glazing salesman more people will seek out a workaround.

And I haven’t even mentioned the infuriating icons that Apple has discarded like litter on my desktop, system tray, and quick launch toolbar. It’s like having a three year old over to visit and having to clear up their mess after they leave.

So what prompted me to finally rant about this on my blog? What’s the straw that finally broke this camel’s back? Well, during this morning’s update I was presented with the following garbled License Agreement: 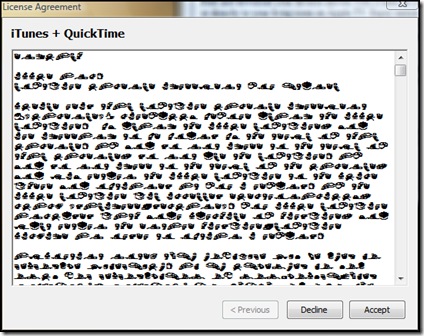 I’m not the first to see this, nor do I have any choice but to hit Decline. Goodness only knows what may be thrust upon me if I choose to accept this lengthy stream of hieroglyphics!

If you suffer a similar angst, here’s how you can alleviate a small bit of this QuickTime/iTunes annoyance. To disable automatic updates in QuickTime, follow these steps:

Note: the risk of doing this is that you won’t receive security patches released by Apple to fix bugs in QuickTime. This could leave your PC vulnerable to malicious code like viral attacks. On the plus side, you won’t be constantly nagged to hand over your digital life and your money every time Apple fixes a bug in their software.

Oh no, now the Adobe Updater’s just popped up. Here I go again…

Written by Allister Frost
Posted in: Uncategorized
A year on
No comment