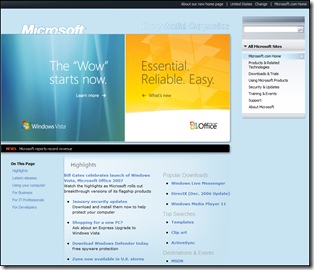 It’s exactly one year since the general availability launch of Windows Vista and the 2007 Microsoft Office system. I have some very vivid memories of the 30th January 2007– the day Bill Gates came to visit us in London and the band The Feeling played a free concert outside the British Library.

Much has happened since then. Both new products have been widely adopted, but it’s Office 2007 that’s really shined through and proved itself universally popular. Windows Vista remains a great choice on a new PC, but users with older machines often find their hardware struggles to keep up. My advice remains the same: if you’re buying a new PC get one based on Windows Vista Home Premium (or Ultimate if you want all the bells and whistles) and ask for a discount when buying Office 2007 at the same time. Home & Student is the ideal version of Office for many users. And, remember, if you’re a student you can still get Office 2007 Ultimate for just £38.95 from The Ultimate Steal (offer ends 30th April).

[Screengrab of the Microsoft homepage 1 year ago courtesy of the ‘usefultechnology’ at Wayback Machine at http://www.archive.org/]